Arcade Coffee Table: I had a dream

I can’t remember when it was. It was at some point. I know it had to be some point in time. Dates aren’t important. Maybe was like a year ago?  Two? Go with that. Two years ago* I had an idea and an epiphany. Had I had this idea for a while? It’s likely a teenage me daydreamed this thought but it got buried under a thousand hangovers and a thousand more comedowns through my twenties. But then, for some reason a two year-ish time ago a daydream bubbled back up, gestating into an idea, a plan.

*Thinking about it, my missus bought me some bits of kit I needed as a christmas present end of 2014, so I had the idea definitely before then, so imagine three years, with the majority of the first year filled with inaction.

My idea was that it would be totally cool to have an arcade machine of my very own. I love retro gaming, it pings the good nostalgia parts of my brain. The graphics, the sounds, the cabinets, the consoles. The cartridges with the exquisite artwork, which my childhood brain could never understand how they could make such fantastically detailed artwork fit onto such a small canvas. I’ve figured it out in the ensuing years.

My epiphany was that if I put my mind to it, nowadays, now that I’m a proper grown up and that, I could actually build one.

And so I have been doing. Sure, I’ve now taken a few months break in between my last burst. I’m a busy guy! I have multiple plates barely controlled, spinning at a significant rotation and slinging food everywhere constantly. Hopefully me scribbling these notes down and posting them into the vacuum of the Internet will inspire me to continue.

I took notes and photos and that so with a bit of luck if you’re reading this & like what you see, and I can be bothered to write a tutorial, you too could go from a flat pile of wood like this: 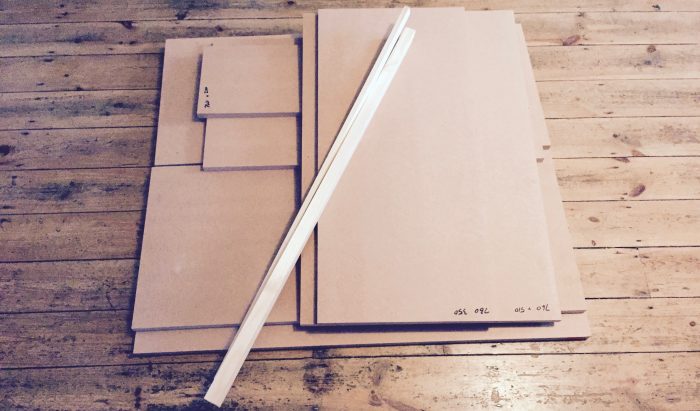 To something a little more arcade coffee table like. 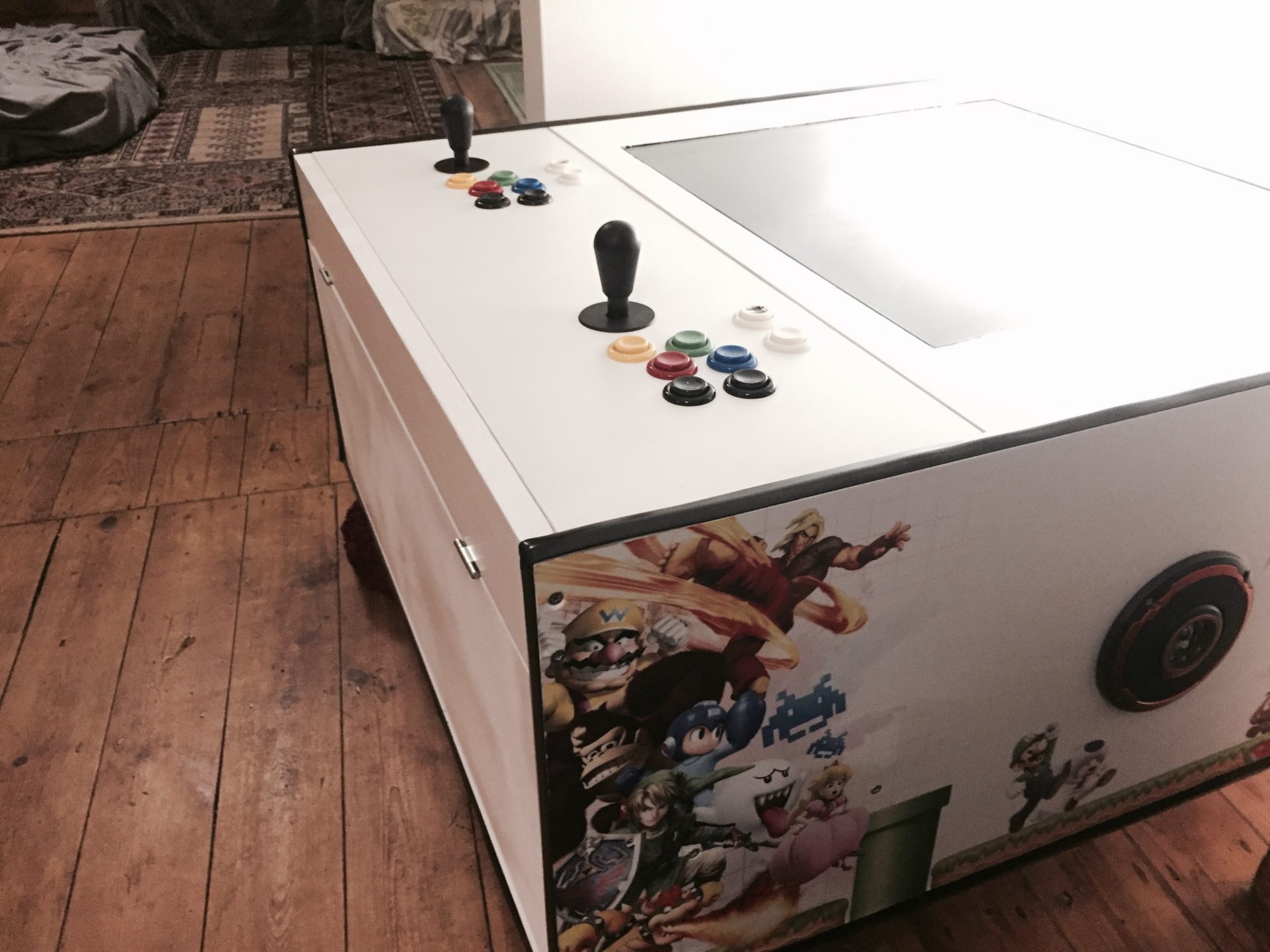 Excited? me too. Lets get started by chatting about why I made a few of the decisions that led to this design, so you can choose to riff on them for your own designs where appropriate.

I made a number of significant decisions for the arcade coffee table early on. On key point I’d stumble into through serendipity later. 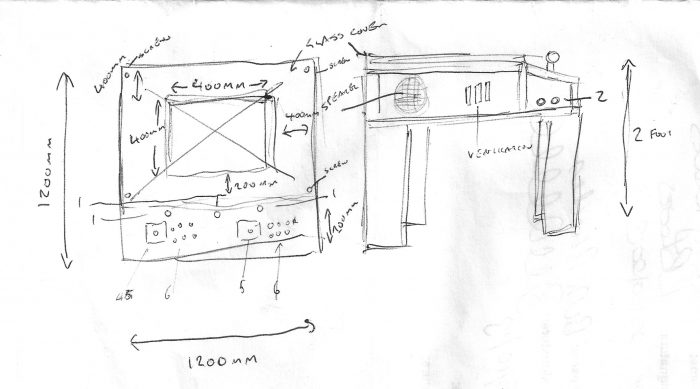 These decisions formed the basis of my early first scribble of what I thought it would be, located above. Proportionally, not a huge amount has really changed from that first pure guesstimation I made whenever it was. Which is quite interesting, for me? I guess? 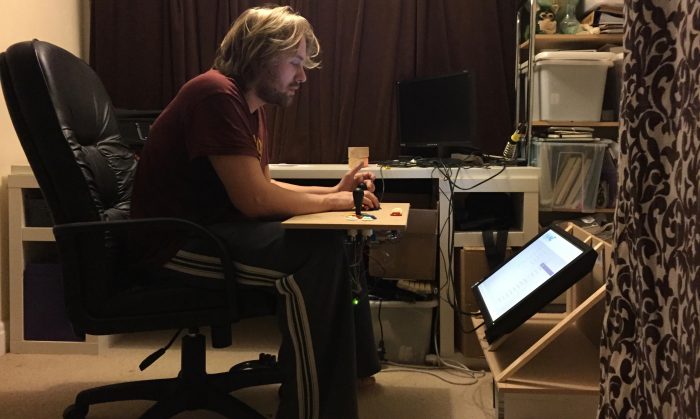 So important was this decision it warranted it’s own H2. This decision informed a lot of the final form factor.

My serendipitous moment came when, whilst in an early stage of prototyping, I discovered that the 4:3 monitor I had ordered didn’t come with the worlds greatest viewing angle. High glare was visible when the screen was viewed flat from above at the angle you would play at on a tabletop style coffee table. So I accepted this as a limitation to work around. My solution was the mount the screen at a 45 degree angle. 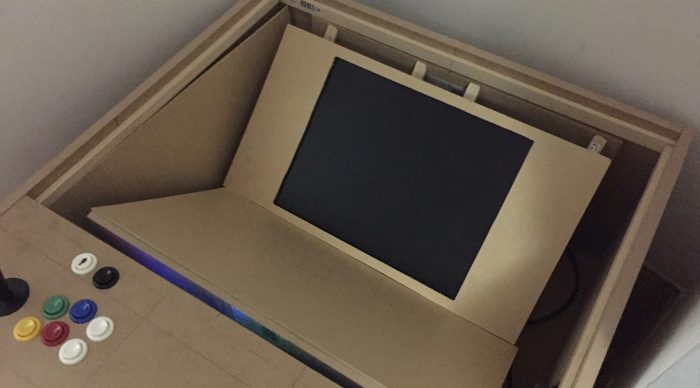 This turned out to be a great solution, there was a trade off that became more evident during build but more on that later. The prototype stand I made ended being the part I used inside the finished arcade coffee table. As mentioned earlier, I’m not particularly good at carpentry. So once I’ve built it and it works; it stays in. The finished result works well, although to ensure good view for the user, I had to create a corresponding diagonal on the opposite. Painting the entire interior area matte black ensured minimal glare on the glass from any reflecting light. This creates a nice seamless black square effect for the viewing window when the device is off as well. 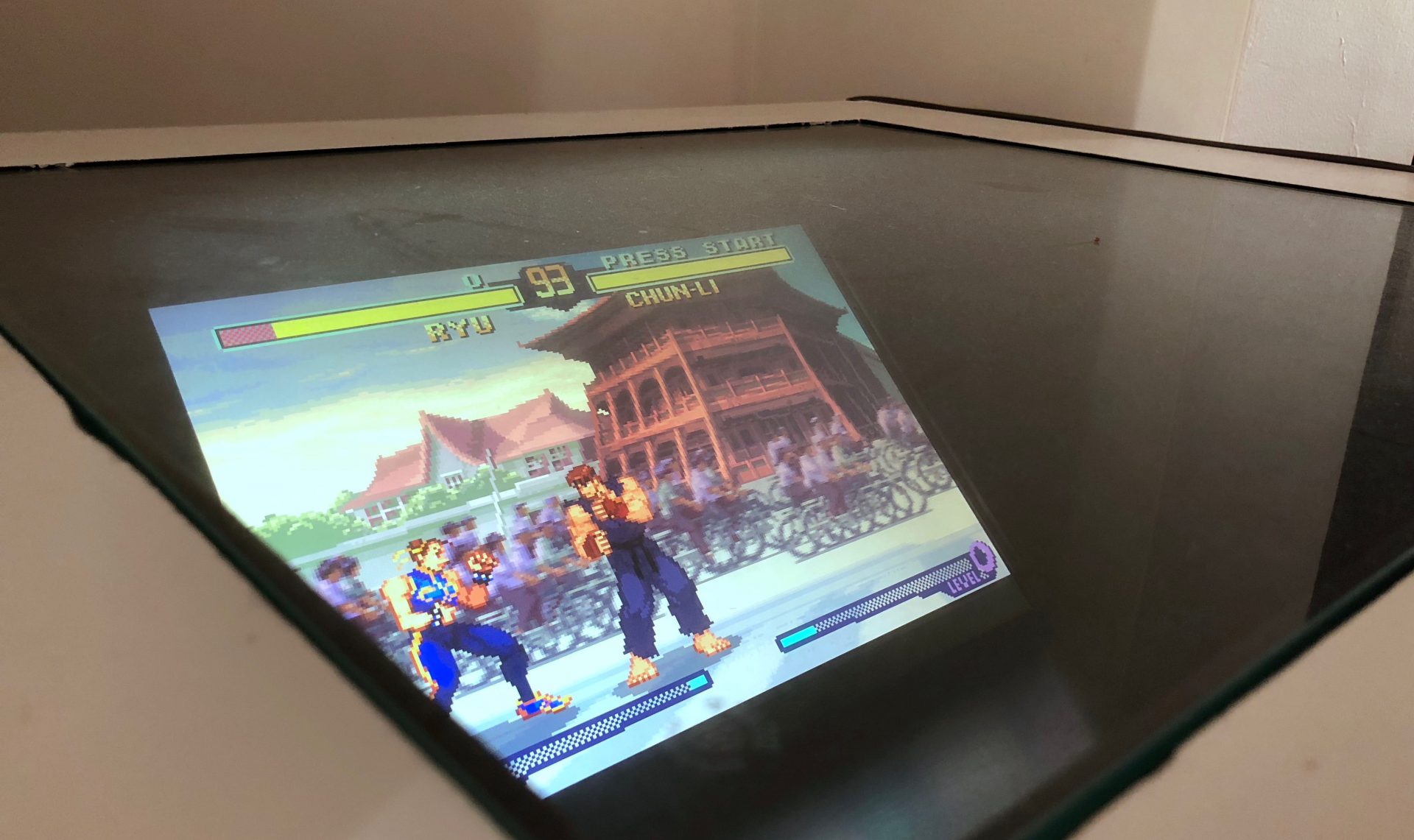 I designed the central console to be removable from the rest of the arcade coffee table. The idea here is so it can literally be used as a table. There is a spare, unpainted lid in the front drawer.I thought is would also be useful in making sure potential crime don’t know it’s an arcade machine if people came to burgle me. Rule one: Crime never takes a holiday. So it’s easier to hide with no joysticks poking out.

The Arcade Coffee Table, hardware wise, is powered by a Raspberry Pi3. Real nifty little things, I recently used one to build a PiGrrl, which is a Gameboy style emulator. The emulators are powered by a frontend called RetroPie. Absolutely fantastic. If you use their software please think about donating. Setup is very easy and even beginners can do it. In fact this was a project that I didn’t use any soldering. Audio is handled via a usb SoundCard I got for the Pi, running to a mini-Amplifier off Amazon and some car speakers I got from Halfords. When one has to busy themselves with the dangerous task of nearly chopping one’s dick off with a power saw, it’s refreshing to not have to spend one’s evenings swearing at the soldering iron too.

Above is a video I shot very early into prototyping with a early prototype control board. Just to give you an idea of how these emulations play in real life. The setup was a bit wobbly here, but I assure you, in real life, this thing plays great. Listen to that lovely authentic arcade click. Ahh, takes me back.

The wood work process for me was a slow, methodical procedure. Power tools invite danger and once invited, danger is attracted to me. Never the less I persisted and generally I had a good result. A tip for anyone wanting to make anything like this is that you can get simple shapes cut from larger boards from B&Q. So i just went in there with a where I wanted my cuts making and generally got the right sizes back. Below is a build diary I guess? It’s the photos I took as I was building it. Let’s call it a build diary. 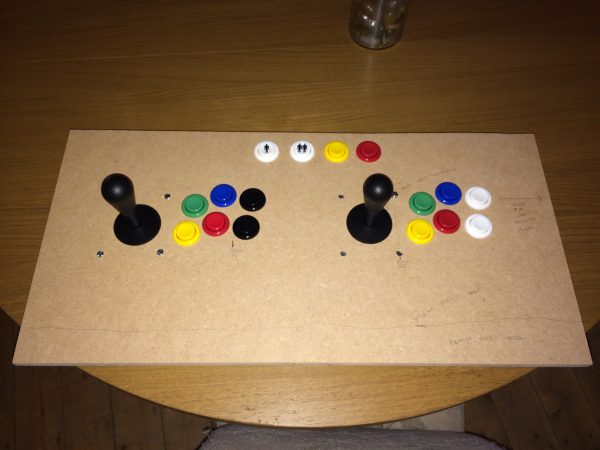 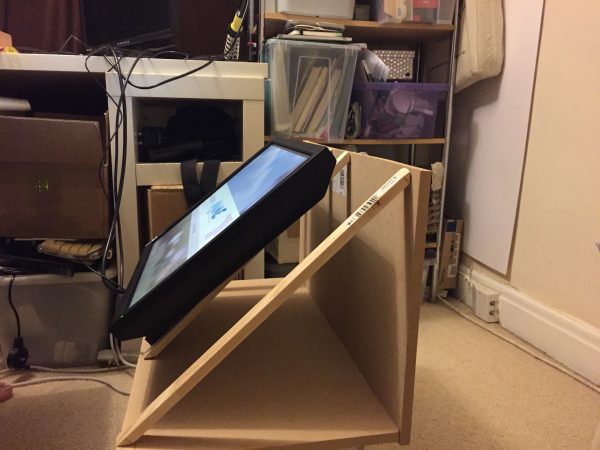 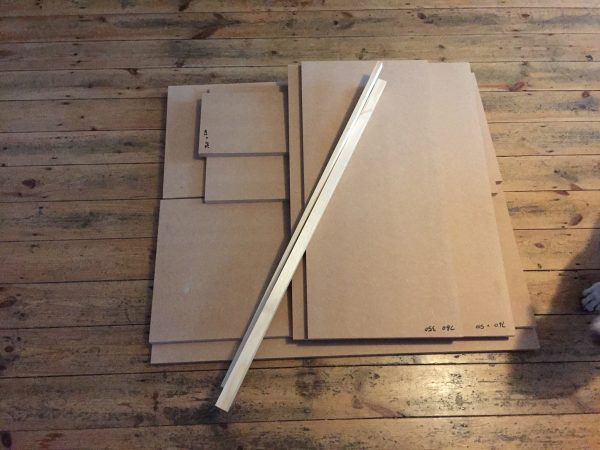 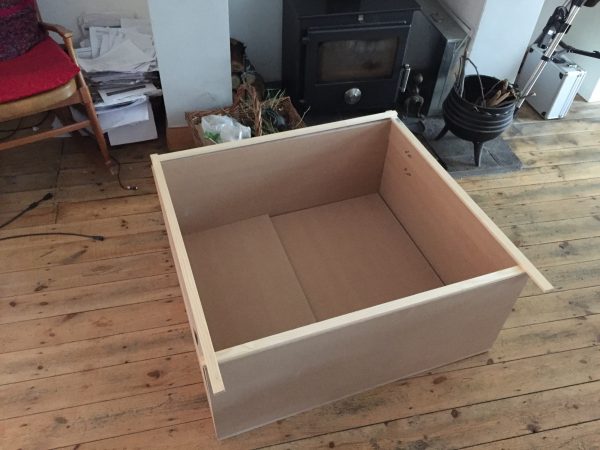 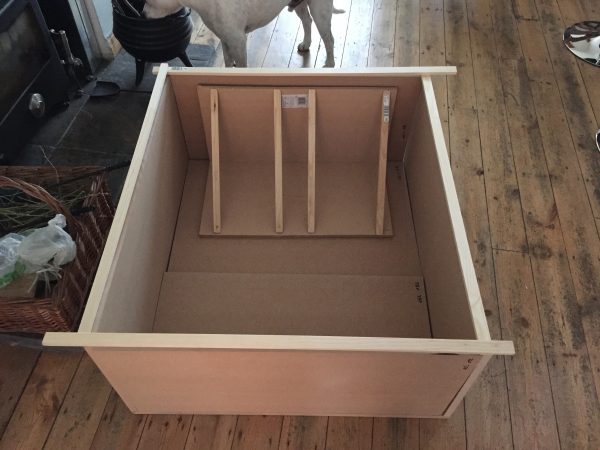 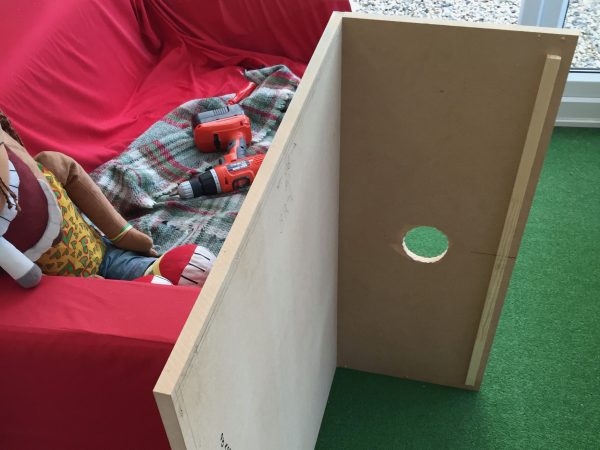 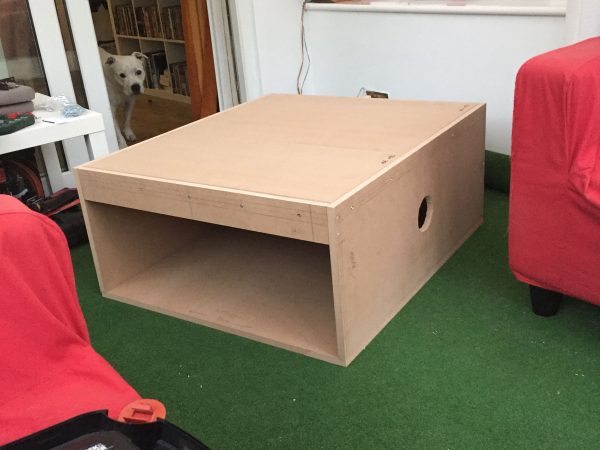 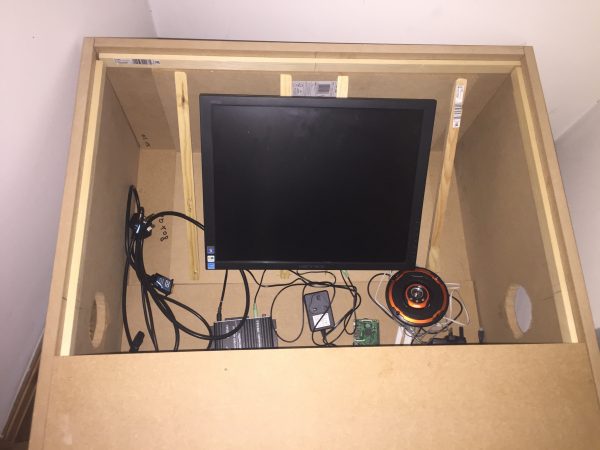 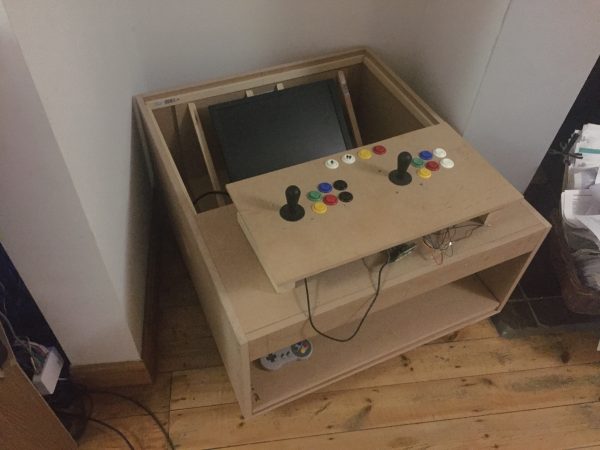 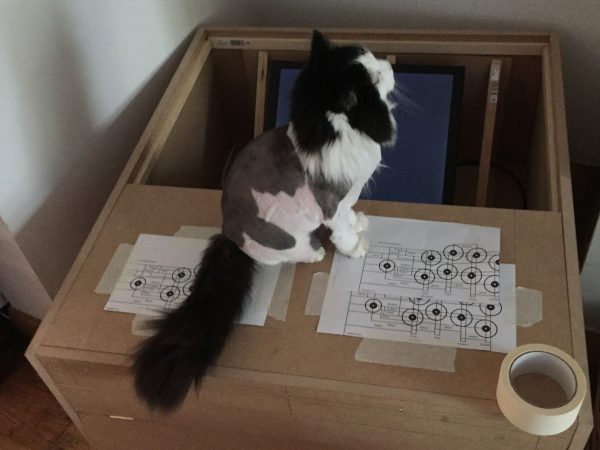 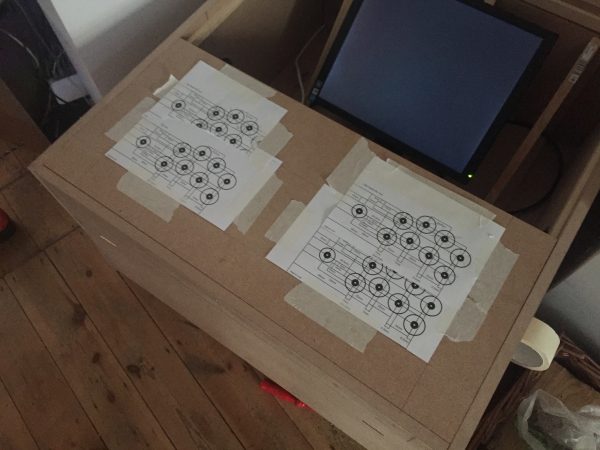 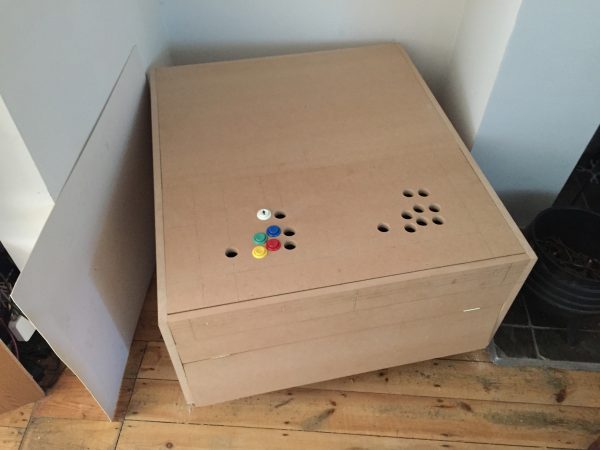 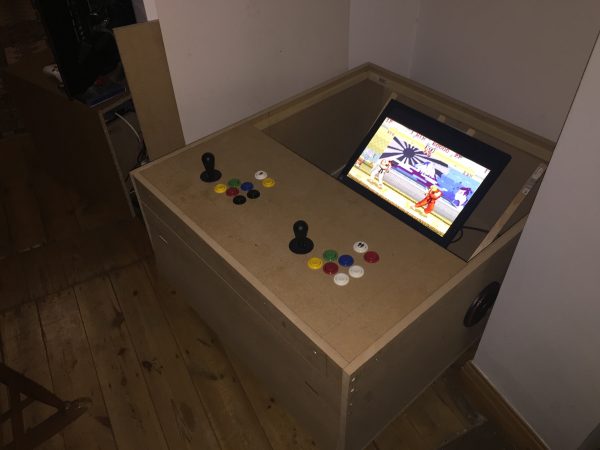 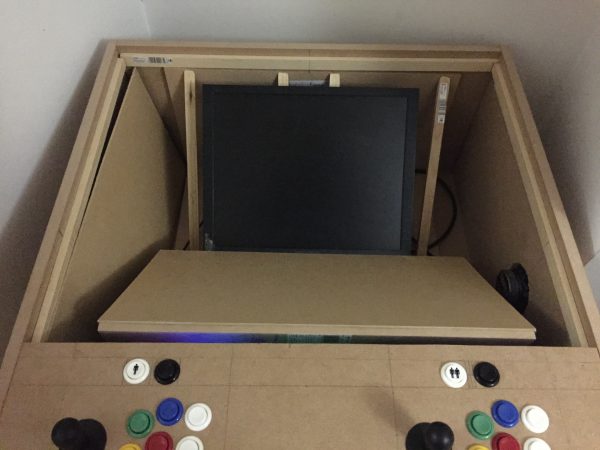 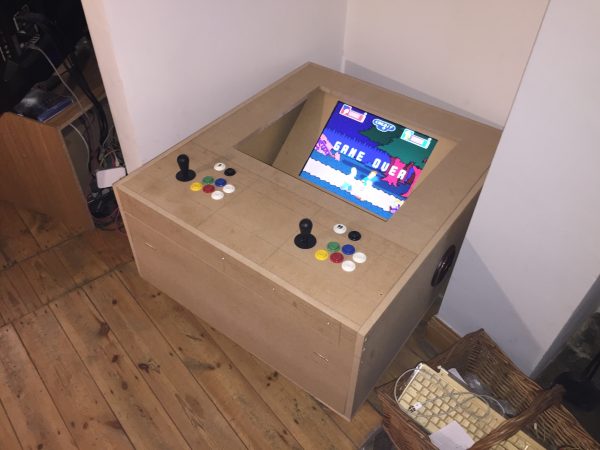 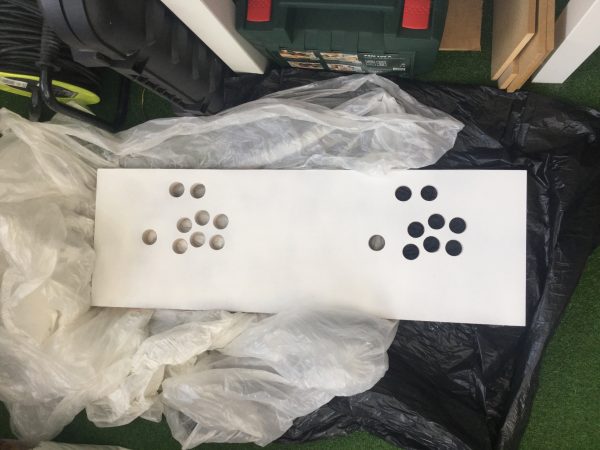 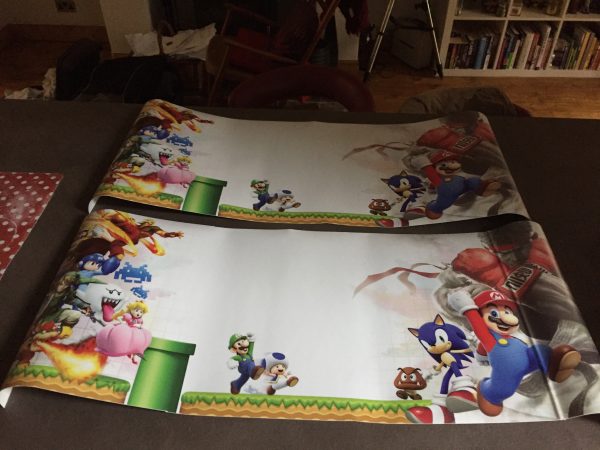 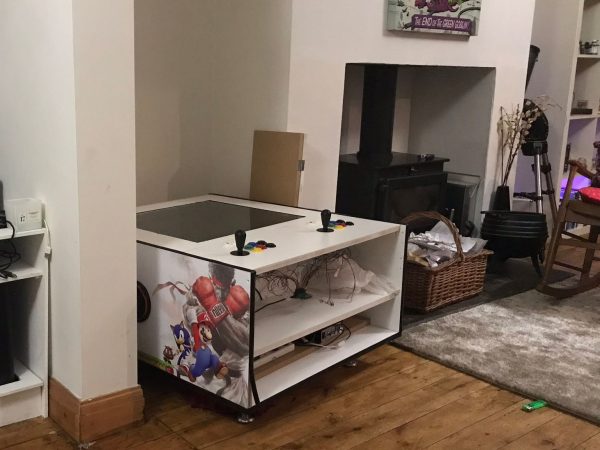 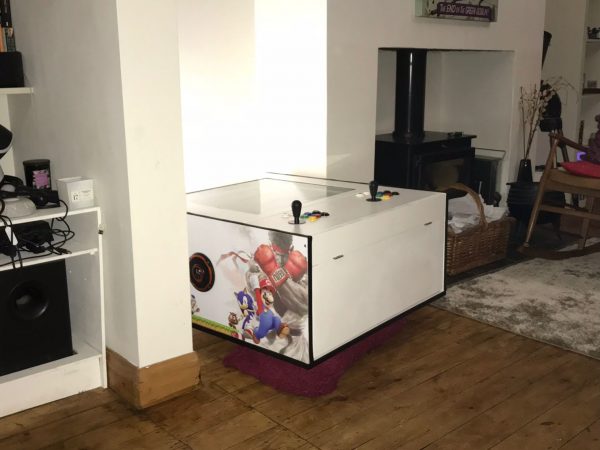 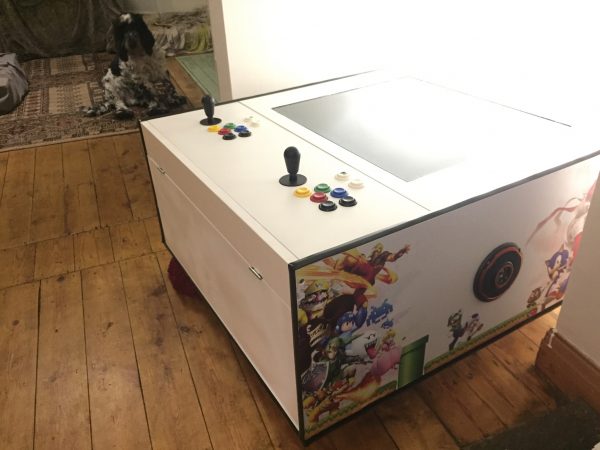 In total I created three control panels. The original prototype that can be seen above. A second board I had to scrap when I’d got my diagonal front view panel size wrong and my own board-cutting to resize it went less than perfect (this is quite a visible board, so I didn’t want any defects).

The joystick placement I got from a site rather wonderfully called slagcoin which has some really good write ups on joystick placements. I went with SNES button colours for the first 4 as a visual reminder of that layout. Buttons, sticks and connect bits can be bought from Arcade World. They feel great. Like the real thing. I also used those guys to buy the vinyl corner thing that wraps the edges for that extra arcade feel. 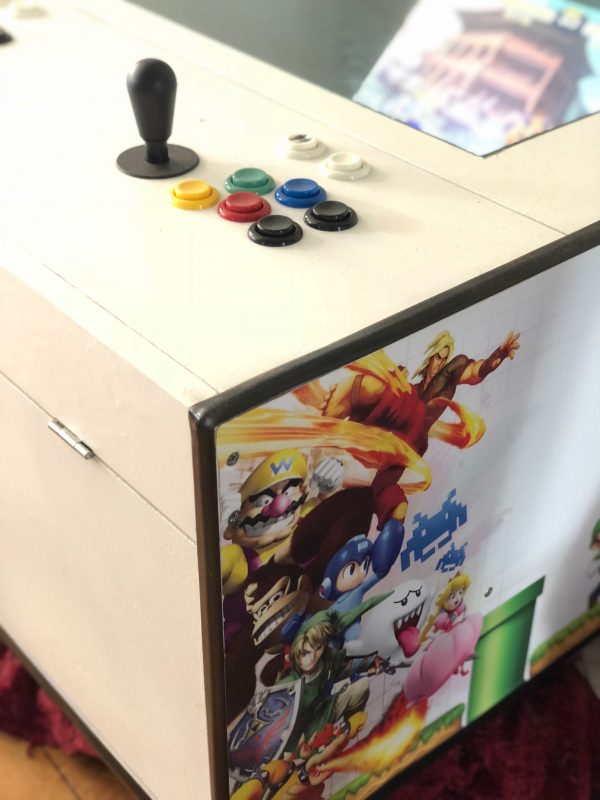 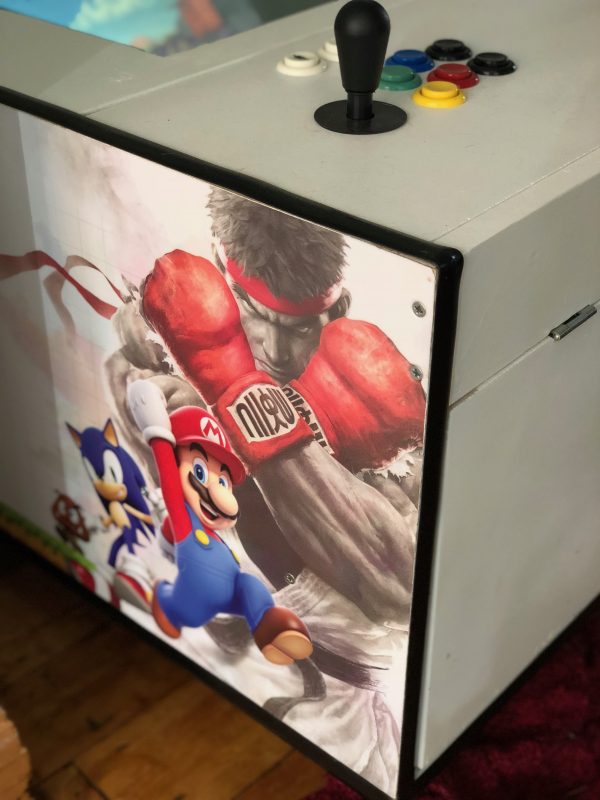 The side artwork is a custom design I pulled together from as many high-res assets that reflected my memories of gaming that I could steal from the Internet as possible. Well and that worked cohesively visually with the other elements that is. Unfortunately this combination of restrictions meant that I struggled to find assets for some of my favourite games.

Luckily, the strong primary colours of early Nintendo games really work well with those SNES buttons and the white and black theme puled through allows the colours to really stand out.

The design, shown in full below, meant that I could run out two copies and give each side of the table a distinct graphic. Especially as by then I knew the table wouldn’t be fully out on display. The two vinyls I got printed from Dock Street Signs in Leeds.

At the moment, I’m weighing up what to do with the top panel. I’m treating it like a sleeve of tattoos I’m building up slowly. I want to see how the rest settles out first.

Work still to do on the arcade coffee table

The front compartment flips up and reveals the inner workings of the arcade coffee table. Most of this is in good shape, it’s all painted, last jobs are to hide the electronics. When I’ve updated that I’ll update this with some images.

Regrets with the finished design

The decision to work with the angled monitor came with one significant downside. Lots and lots of extra wood. In the original sketch you can see that I wasn’t accounting for all this. And wood means weight. So this particular arcade coffee table is heavy and big. It’s big wide too. It might be overly big. It’d be great in a room with an L-shaped sofa though. Alas that is not my house.

The only area where it’s not too big is in the feet. The choice available to me at B&Q meant my arcade tables legs are about 4 inches to short for the users arms to naturally rest there. I aim to rectify this at some point when I find appropriately sized legs.

I’ll tell you how to make this yourself. I’ll probably make this tutorial sooner if people actually are interested in making one. If no one cares I probably won’t. I’ve got other projects to do!